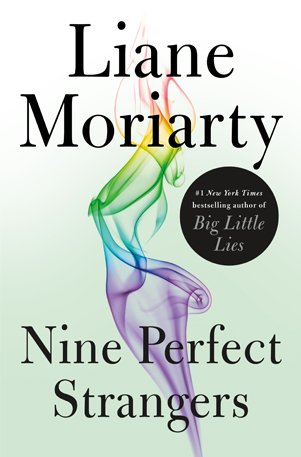 From the no. 1 New York Times bestselling author of The Husband’s Secret and Big Little Lies.

The retreat at health and wellness resort Tranquillum House promises total transformation. Nine stressed city dwellers are keen to drop their literal and mental baggage, and absorb the meditative ambience while enjoying their hot stone massages.

Watching over them is the resort’s director, a woman on a mission to reinvigorate their tired bodies and minds.

These nine perfect strangers have no idea what is about to hit them.

With her wit, compassion and uncanny understanding of human behaviour, Liane Moriarty explores the depth of connection that can be formed when people are thrown together in… unconventional circumstances.

After Big Little Lies came out I kept making the same joke about setting my next book on a tropical island, and needing to do a lot of research to get it right. After a while, I thought, ‘Actually why not?’

I began writing a story about two lottery winners honeymooning at a luxury island resort but I was interrupted by an event at a backyard barbeque, which was the spark of inspiration for an entirely new idea.  I put my tropical island aside and wrote Truly Madly Guilty.

I was holidaying after the book tour for Truly Madly Guilty, when I stumbled upon a novel called Miss Pym Disposes by Josephine Tey. Published in 1947, it’s a murder mystery about an author who visits a boarding school for gymnasts. I adored this book and especially relished learning the school’s rules and procedures. I decided I wanted to write a book like that. I wanted to write about what time breakfast was served.

I remembered a long ago weekend away at a health resort with a friend. There were lots of rules about no alcohol and coffee. (We broke the rules.) My island resort became a health resort, called ‘Tranquillum House.’

I created a character, inspired by ‘Miss Pym’ called Frances Welty, who is a formerly best-selling romance novelist. I rescued my lottery winners, put them in a Lamborghini and sent them off to Tranquillum House with Frances together with six other guests. I also created a crazy, charismatic Russian woman called Masha, as the resort director.  I loved writing Nine Perfect Strangers so much and now I can’t wait to see Nicole Kidman play Masha and Melissa McCarthy play Frances in the TV adaptation of the book, out this year! I think it’s going to be really special.

PS. I still haven’t given up entirely on my tropical island resort story. Maybe one day when we’re all allowed to travel again.

What the reviewers say

“She is…both hugely popular yet subversive…Nine Perfect Strangers shows Moriarty still taking risks with fiction…weighty issues writ with humour and a light touch. The hammer is still in the handbag, ready to smash a glass window or two.”

“Welcome to Tranquillum House where those Perfect Strangers … have come to sort out their lives …This gives Moriarty the opportunity to do what she does best, write about the human condition and connections that bind us all, with wicked humour, empathy and compassion – and a little bit of danger thrown in.”